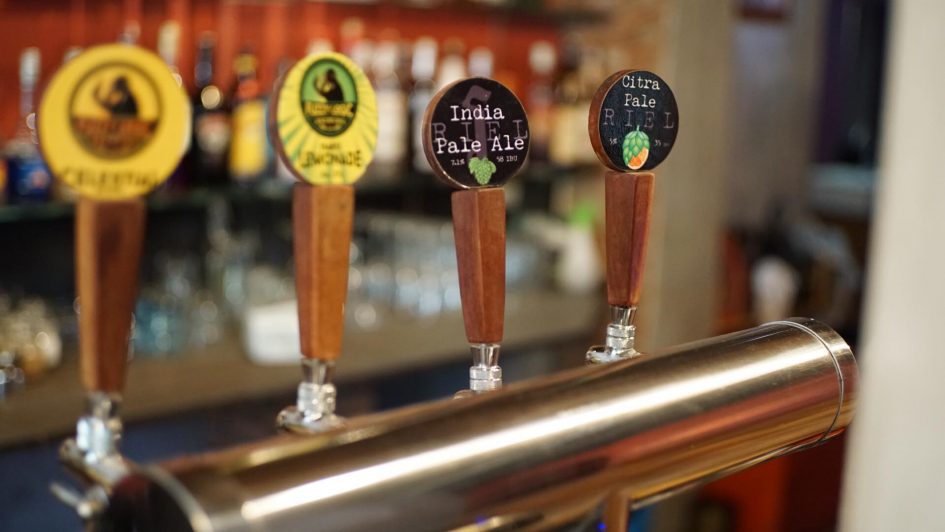 It has not been an easy year for the Cambodian craft beer scene. There has been an alcohol ban, lockdowns, curfews, and pretty much everything possible that has made it difficult for venues and breweries to conduct their business. Everyone is still trying their best to survive and there are some cool updates we want to share with you. There is for example a new Coffee Stout in creation and Riel Brewing is working hard on their rebranding.

You can now find craft beer on tap in Kampot

The craft beer scene in Kampot seems to be growing relatively quickly considering the relatively small size of the town. Flowers Nanobrewery has been the brewer from Kampot that everyone knows but Freak Brothers and the new brewery Projekt Brews have quickly gained a good reputation.

Stumble Inn has for a few years been one of the few places in Kampot that serves craft beer but also Monkey Republic is a place that has been put on the map of craft beer lovers. This place that gained its reputation from being a backpackers hostel has done many changes in the past year including improving its food menu and remodeling its layout. Nowadays they prefer quality over quantity which can be seen in their focus on serving some of the best craft beers in the region.

Just a while ago you could find bottles and cans from Pasteur Street Brewing and Heart of Darkness, two of the biggest craft beer breweries in Vietnam. In the past month they have finally also installed a tap system. When I visited they had 4 taps with beers from Riel Brewing and Fuzzy Logic.

I had a quick chat with Slava from Monkey Republic who said the following:

“I was very excited to get craft draft at our place! It was a long time in discussion and quite some time was put into thinking about it. The main fear was – are people in Kampot ready to pay more for premium beverages on tap?

The first time I started to talk about it was to the Riel Brewing guys, on the morning after the Kampot Craft Beer Festival. Haha. Well, quite a few people have doubted this idea as they have seen the disappearance of the big local lager brands on tap at Monkey Republic as the end of an era. But what we have seen is that this move did bring a lot of new customers and it has expanded our clientele base. And even a few people who didn’t agree with the move decided to give it a go and learned that they actually do love craft beer on draft. They started to ask when and which beer is coming next.

The interest is there and people are learning something new which benefits both sides. It’s almost like having specials at the restaurant – patrons don’t get bored with the same choices on the menu. We had some scheduled renovations to do, which changed the look of our place completely, and it was the perfect time to reopen with the new concept and direction, and have craft draft on tap!

Overall it was a very positive and exciting decision to make – more people, more exciting new flavours, more revenue, and more profit. We now always offer 4 different beer flavours on tap, and that’s a big thanks to Riel Brewery and Fuzzy Logic!”

Mid-August Andy and Tyler from Riel Brewing also got interviewed by Asia Brewers Network. In the interview, they talked about the struggles and opportunities of running a craft beer brewery in Cambodia. You can find the link to the 50-minute interview below.

The new coffee shop Crooked Brew has teamed up with Riel Brewing to brew a beer. Not surprisingly the first beer from the coffee shop is a Coffee Stout. This beer has an ABV of 5.8% and is brewed with coffee from Rumble Fish Coffee. The Coffee is from Laos but is roasted in Kampot at Espresso Coffee Roastery. The beer is very limited and will be available in the beginning of September at both Crooked Brew and Embargo.

Erich Phillips, founder of Cerevisia Craft Brewery, just returned to Cambodia after spending about a year in Singapore. We reached out to him for some comments on the growing Cambodian craft beer scene.

“Cambodia’s ban on alcohol was a positive move towards the fight against our common enemy. We must all do our part, no matter the fatigue. Many have learned to be flexible to the imposed restrictions, although the effects have been felt by many in our industry.

Let’s not look backwards, but rather to our future of Craft Beer in Cambodia. 2022 will be a calendar year for beer. Though we might not see the macro players cashing in on artisanal flavors, I believe that we are at a tipping point for those “big dawgs” to dabble. I would bet a dollar to a donut that we might have a “Shock Top” type of movement in Cambodia.”

Projekt Brews is planning to expand their brewery

Projekt Brews from Kampot is one of the newest breweries in Cambodia and has only been seen a few times at Embargo in Phnom Penh. They are currently expanding their brewery and the owners are hoping to be able to supply more venues soon, both in Kampot and Phnom Penh. Mosaic Skies and White Lies Session IPA have been well-received by craft beer drinkers and we are looking forward to trying more of their beers soon. In Kampot you can find the Projekt Brews beers at Stumble Inn and Jetzt.